Is Certification Needed? If Yes, Which One? 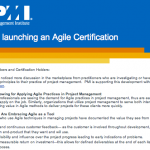 PMI issued a letter a few days ago announcing the launch a of new Agile Certification.  As more and more project management practitioners are showing interest in Agile, it seems appropriate that PMI delve into this area to explore the intersection points between the PM framework and Agile.

PMI has been following a systematic approach to introducing new certifications and indeed updating its flagship certification, the PMP.  Over the last few years we have seen the launch of the CAPM, PgMP, PMI-RMP, and PMI-SP.  The exciting aspect of these launches is that they are part of an ongoing process of market engagement that PMI follows.  It starts with the career delineation studies that the Institute conducts and builds on market research and examination to determine viability.  It ultimately ends with the launch of the certification.

While these new certifications continue to gain momentum and attract interest, there is little doubt that the PMP continues to be the flagship of project management certifications.  Throughout my membership and association with PMI I have seen the PMP community grow from several thousand back in 1996 to over 370,000 PMP holders today.

Since its been a while since I had gone through the process, I was doing a bit of surfing on the PMI website and ran across a 1994 article in the PM Network written by my friend Dr. David Frame.  The title of the article is “The Value of PMP Certification.”  In the article Dr. Frame identifies 3 reasons at that time for the growth of the certification.  They include:

“(1) the growing awareness of the importance of project management in helping organizations to survive in turbulent times; (2) the commitment of organizations to developing and measuring the project management competencies of their employees; and (3) the commitment of local PMI chapters to promoting certification. Together, these three factors indicate that much of the growth of certification is attributable to the fact that people perceive that its value is great.” 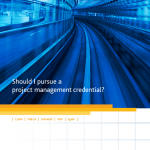 I don’t think it would be a stretch to say that the launch of new certifications was probably driven some of the type of behaviors that Dr. Frame mentions in his article.  The portfolio of certifications is indeed robust and that in itself will allow the profession added growth, especially in niche areas.  It recognizes that not everyone in the profession is a project manager but rather there are other professionals that need to be recognized.  One thing to keep in mind though is that to the uninitiated the list of certifications may be confusing.  These individuals may not be familiar with PMI or the various roles. Being able to offer an explanation of the differences is needed to help professionals determine which certification is right for them.  To that extent, I think it was wise on PMI’s part to put together a brochure to help guide individuals through the process of determine which certification is aligned with their needs. 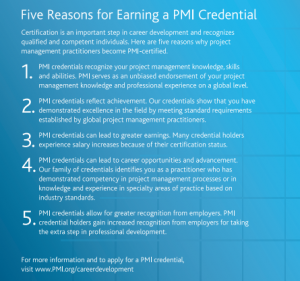 Another risk that I am struggle with is a behavior that I began to see a year or two ago where some professionals have pursued every single certification that PMI is offering.  While I will acknowledge that in some instances it makes sense for an individual go pursue more than one certification, I am a bit concerned when I run across an individual that has every certification.  It typically is seen in tag lines that look like this: “John Doe, PMP, PgMP, PMI-SP, PMI-RMP.”  I think that as a community we have to exercise some self restraint and try to decipher how each of these certifications will help us but also how they will help the organizations we serve.  If we look at PMI’s brochure, there are some general highlights of the value of certification which are important to keep in mind.

I believe that doing so will allow for the profession to maintain its momentum and will not dilute the certifications themselves.  Keep in mind that we started the journey from a position of obscurity and we are now at a point where most organizations recognize the flagship credential.  In my own career I can recall back in the mid to late 1990s business professionals and potential employers expressing their lack of familiarity with the certification.  Now on the other hand most employers are likely to require the certification and even in some instances immediately disqualify candidates that do not have it.

The challenge that we have is by seeing professionals run after every certification, it raises the debate once more over the value of these certifications.  It brings to the forefront discussions on whether the attainment of the certification is in itself an indicator or predictor of success and/or competence on the job.  Indeed this is a controversial debate and frankly is one that is not needed.

In my interaction with project management stakeholders worldwide I have seen individuals who go to extremes to either over-sell the credential or under-value it.  Some hail it as the only option to adopting project management while others trash it as a waste of time.  Frankly the truth, like most things in life and work, is somewhere in between.

Certification in this case, as the PMI brochure highlights is a way of recognizing past experience but more importantly in my opinion it is a demonstration that the professional speaks a common language with me and other PMPs.  It does not mean they will succeed or fail on the job.  It is a departure point for the conversation and assessment, not an end to it.